Somewhere in my head, I had the inspiration of a classic rock album which featured 70’s-era handwritten artwork set upon a simple dark background. In my memory, it was simple, yet epic. Just by looking at the artwork, you knew that listening to the album would be an experience you would keep with you forever. It is also apparently, illusive, since a solid hour of frantic Googling produced no results congruent to my recollections. This is disappointing for the purposes of writing this column. (I wanted to show you what I thought I remembered), but of no matter to how the creative process actually played out.

Early on, I realized the double A’s of the title could be something that was mined for a design element. When I happened upon the idea of joining them together, I placed some text into Google SketchUp, extruded, rotated and manipulated, and got something like you see above.

I saw something that reminded me of the old RKO radio antenna. This seemed appropriate. I fooled around with a podium, and embossing the title to the art, but neither felt right.

I wanted the “antenna” to have a grander scale – as if you were standing at its base while its immensity towered over you. I started formulating how to make that happen, and of course, realized that first of all, I’d need the post nearest to us to extend farther down. I made this change, and was about to make an adjustment to the perspective of the top part of the structure, but stopped in my tracks when I saw the cross in the design for the first time.

I’m not going to say the angels sang and the text got back lit like Roma Downey in Touched by an Angel, but it was weird.

I am not going to overstate this. I’m not going to say the angels sang and the text got back lit like Roma Downey in Touched by an Angel, but it was weird. It wasn’t something I had planned. So, “unexpected,” may be the most correct word.

Truth be told, this is not even a very overt Christian album. It was written as a concert for a secular audience. Are there themes and concepts here and there which point to Christ? Yes. I do think it is subtle, though. Much like I believe this cross to be. I don’t know, maybe it’s the first thing you saw! 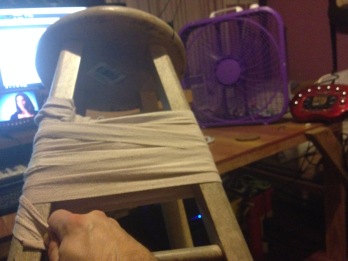 I initially wanted the background to be solid white. But, it just didn’t seem finished. I thought maybe adding a faux canvas texture could help. Looking through some media generators, I saw a gauze setting. Oh, yes! Gauze fits the Almost Alive theme quite nicely. I tried it out. It gave me the result you see above. Not bad, but it still seemed a tad amateurish. Plus, part of me said it was a shortcut to use a computer-generated background.

I decided to make my own gauze bandage background. Luckily, I had to only reach into my sock basket a few feet away to snag what I was looking for! The stool was nearby, too. It also occurred to me, doing this would give me an additional design element I could use on the other album art panels, as well. A rolled-up bandage can be artsy if the lighting and composition are just right. 🙂

So, that’s about it. I really wanted to find a spot for my stylized “G,” but nothing I tried worked. Maybe it will make the cut for the next project!